I made a commitment to blog about the cupcakes I've baked and I haven't. I feel like I'm breaking some huge promise.

Well here's the deal. I made some cupcakes right after I got my new cookbook! First I made the Applesauce and Cinnamon cupcakes with a caramel sauce for the top. I topped some of them with apples and some with pears. Personally, I like the apple ones better. 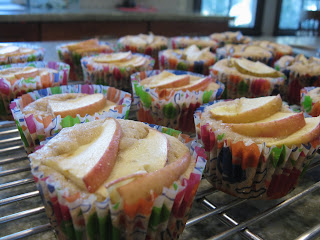 The caramel sauce really added to the cupcakes and they were pretty good. I was pleased, even though they were more of a hybrid between a cupcake and a muffin.

A couple days later I decided to make the Chocolate Chili cupcakes. I substituted the whiskey frosting with cayenne chocolate ganache. Not gonna lie, the ganache was spicy but I liked it. The cupcakes were dry and I didn't like them one bit. But they certainly looked good! 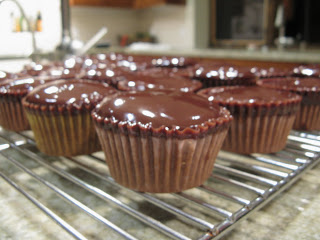 For Christmas my sister bought me an ebelskiver pan. I've never made them nor had them before, so this was a new experience. I couldn't wait to try them out, so I searched the cupboards and kitchen and found some bananas and chocolate chips to experiment with. It was super fun, even if it did take me a while to figure out how to make the ebelskivers nice and round on both sides. But I did it and they were really good! 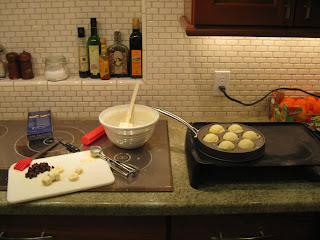 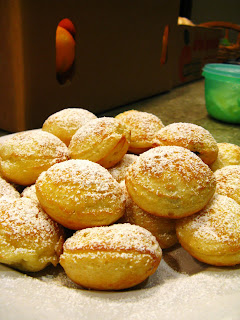 So I bought a book today. Not just any book, a recipe book. A cupcake recipe book. It's called 500 Cupcakes and let me tell you, it's AMAZING. I haven't even baked anything from it yet but I've spent a good two hours just pouring through the recipes and the variations of the recipes and I can't, for the life of me, get enough of it.

So I've made a goal. I'm going to try and use my day off every week to test out a new recipe from the book. Tomorrow I'm debating between doing Applesauce and Cinnamon cupcakes with a caramel sauce on top or the raspberry and coconut ones. I'll be sure to post about whichever I end up doing.

I'm so excited.
I can practically taste them already and they are delicious
Posted by Manda at 10:30 PM 1 comment: