"The past is over and gone. The future is not guaranteed"

It's times like this, when I feel as though I've fallen under the spell of looking at my feet instead of forward, when I need most of all to pull out every ounce of effort I have and put it towards looking up with a smile.  I am who I am because of the things that have happened to me.  I am a woman with a bright future, I am above the things and people of the past.  I deserve happiness because I know I am worth it.

“A healthy body is a guest chamber for the soul: a sick body is a prison”

Yesterday was a pretty good, lazy day.  I ran some errands, I planned on going out to Roscoe's with some friends.  Around 5pm, though, everything took a turn for the worse.  I started to feel sick to my stomach out of nowhere.  I figured I must have eaten one too many rootbeer barrels  but no, it was the stomach flu.

Last night was one of the worst nights I can remember.  I was so so so sick.  I couldn't even keep down two mouth fulls of water, which was all I wanted due to the fact that I was severely dehydrated.  I tried to sleep it off, but I was either too hot or too cold.  I tried a bath, I tried a cold compress.  Nothing was helping.  I was miserable.

By midnight, however, I was able to keep down some water, which I drank greedily.  Around that same time I head noises outside my room and discovered that my younger brother James was sick, too.  By 3am, David joined the ranks of the sick.  It was then that I was able to finally fall into a restful sleep.  5am rolled around and Aaron banged on my door, asking for the medicine.  When I ventured out of bed around 9am, I discovered that my Dad was the only one who remained unscathed by the Stomach Flu of Evil.

Aside from some aches in my body, I feel 100% better.  I'm glad it was a short bug, because last night was honestly terrible.  It was so awful.  And now it's Christmas Eve and my whole family seems disabled.  Everyone is in bed, no one wants to do anything except reel from the night from hell.

Merry Christmas to us.
Posted by Manda at 1:55 PM 1 comment:

“There's nothing half so pleasant as coming home again"

After one of the longest weekends of my life, I made it home.  No more detours or being crammed in the back of a pick up truck, no more country music, no more numb knees.  Being able to finally crawl into my bed Sunday night was joyous.  I have a really comfortable bed...

Home is where I go to be refreshed.  Home is the place where as soon as I walk in the door and the sound of my suitcase on the tile travels to the back of the house, I hear my father's booming voice shout out, "Heeey!!!"  I dropped my things and ran to my parents room, greeted by brothers and parentals with their arms stretched out wide to catch me.  I was here just a few short weeks ago for Thanksgiving, but it still feels like ages.  To be welcomes home with such vigor was a delight is one of the best feelings.

"Home is where the box is"

Let me tell you about a guy named Justin.  He is hard working and studious (in most of his classes.)  He's reliable and intelligent, funny and sarcastic.  He's motivated and kind.  He likes it when I send him Natalie Dee comics like this one: 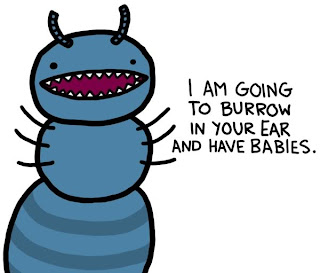 When I tell him to treat himself to a slurpee after a grueling test, but the slurpee machine at 7-11 is out of order, he gets creative and buys himself something else then snaps a picture to show me how awesome he is. 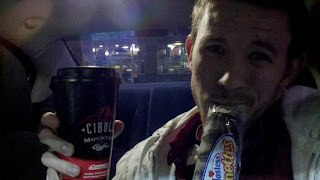 He encourages me to do well on my homework, listens to me talk forever about my family and my crazy roommates.  He keeps me company whilst I study on campus, even though he's not in Idaho.  He swaps new music with me and sends me funny youtube videos.  I could probably go on and on with all the things this kid manages to do from forever far away.

He's a good listener, he's a good friend.  He wanted a blogpost, so he gets a blog post. 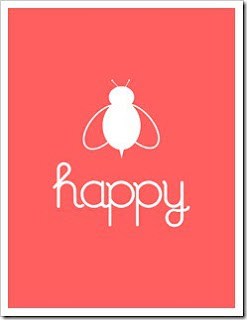 Today is a good day.

“Life at best is bittersweet"

This was the last full week of the semester.  It's been all sorts of different for me.  I've spent entire days in my room studying, nights out with the girls, trips to Idaho Falls, and on skype dates.  Everything feels so bittersweet right now.

I've got some really awesome neighbors.  Along with my roommates Kelly and Schmems (Emily), I spend a ton of time with Xanning and Madi.  Late in the semester it became a Friday night tradition to drag our mattresses downstairs in either our apartment or theirs, watch a scary movie, and stay up until at least 4 in the morning.  It's been refreshing to have solid girlfriends out here.  These girls are some of the most ridiculous, hilarious, awesome people I have ever met.  We often say that we wish we had cameras in our apartments just to capture all the hilarity that goes down.  I'm not sure if anyone really believes that we are as awesome as we say we are.

Basically, things are really good.  When I'm not with the girls, I'm either rocking my school work or watching Band of Brothers with Mike and the other guys from 411.  With only three days left of school, I feel pretty satisfied where I'm at with all that.  It's just...everything is coming to a close and I feel like everything has just started going.  I'm settled, this feels like home.  I'm established, I've got good friends, I've got killer work ethic.

After this semester Xanning graduates, Madi leaves for winter semester.  I won't be in school in the winter and as of right now, I have neither a job nor a car, so it's promising to be an interesting few months in the frozen tundra of Rexburg.  It's going to be different, that's what makes it bitter.  Sweet because I'll be back, bitter because I'll have some adjusting to do.

Things are changing.  I think some things will be good, though.

I'm on the verge of something really good.

"Something tells me I'm into something good"

Every once and awhile I get the overwhelming desire to read Catcher in the Rye.  I'm not really sure when I fell in love with that book, but I absolutely adore it.  I like Holden, but at the same time I hate him.  And pity him.  He's the misfit, hipster boy that I want to be my best friend.  I'm fairly certain that if Holden were actually my friend, I'd hate him.

All the same, I love the book and I love Holden.  I wish I had my copy here in Idaho with me.  What was I thinking when I chose to leave it at home? 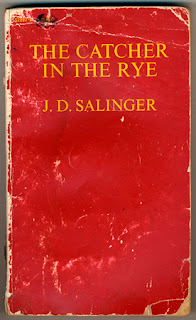 This is what my copy of the book looks like.  On a good day.

“Knowledge is ancient error reflecting on its youth"

Finals are quickly approaching and my brain is melting.

Friday is the day when I don't have any classes and I use the time to work on my online class, but also to relax and prepare for the weekend. Today, however, I got up early, filled my backpack with books and pencils, and headed to the library.  I wrote papers, took a quiz, and worked on several projects. I feel incredibly productive today.  Seriously, I'm getting things done and it feels so good.

When I consider where I was last December, I've come a long way.  This past year has been such a tumultuous one, with huge ups and huge downs.  I've said it before, but this year has been my year. 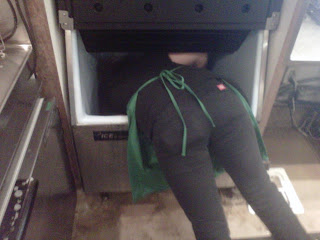 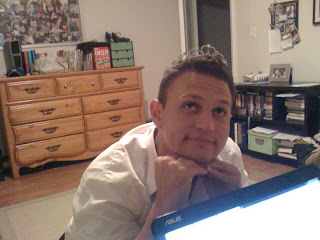 Erik is a pretty, pretty princess 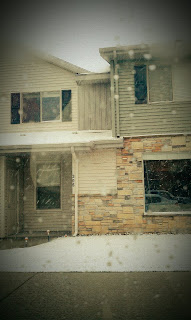 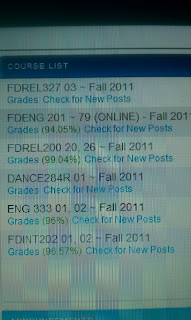 I could go on and on about the awesome things that have happened this year.  True, there were some low points and I could go into those, but instead of viewing those things as negatives, I chose to look at the way they've changed me and helped me become who I am today.

"It's true I've become a skeptic"


Said there'd be no going back
Promised myself I'd never be that sad
Maybe that's why you've come along
To show me, it's not always bad

'Cause I can feel it, baby
I feel like I'm falling for you
But I'm scared to, let go
I'm scared 'cause my heart has been hurt so

It's true I've become a skeptic
How many couples really love
Just wish I had a crystal ball
To show me, if it's worth it all