There are no good quotes about spiders

I feel like my fear of spiders is completely over the top. For awhile there I was doing really well with them and I could bring myself to smash them with a shoe or even do the cup and piece of paper deal and dump them in the toilet. But did that last? No.

I've gone back to screaming, at the very least gasping with vigor, whenever a spider is found. The spiders that I find in my room aren't even all that impressive. They're these small sized spiders than seem to live in the grout in my shower (and won't go away no matter how many times I caulk the grout) that always appear full grown. They lurk under the ledge of my counter, the corner by the bathroom, and under my shampoo bottle. Once I found one hiding in my loofah. Worst shower surprise ever.

Tonight I went out with some friends after going to the temple and I drank about fifty glasses of water. By the time I got home I had to go to the bathroom like none other, so I raced straight there. Then I glanced to my left and there was this HUGE SPIDER just chillin on the wall RIGHT next to me. Just chillin! Like, "Oh hey, you're peeing? Drink a lot of water, did you? Awesome. I'M A SPIDER!"

I screamed. It ran away. I've since barricaded my bathroom door with towels so there's no way that perverted thing can creep into my bed tonight.

Spiders are disgusting little creature bug things that have way too many legs and way too many eyes and the way they move is outrageously creepy. I've had too many awful runins with spiders for my fear of them to be ever done away with.

I made an hors d'oeuvre today. Well, in reality I mashed together two of my favorite recipes, but it worked! It worked so well that I'm going to do it again this week and take them to class and have everyone salivating at the thought of my rosemary and shallot chicken ebelskivers! And then I will win the hearts of my fellow culinary adventurers! I will be made the hors d'oeuvre QUEEN!

Hors d'oeuvres aside, I'm hungry for babies. I got to hold the 21 day old son of my cousin Isabel. His name is Andres and I fell in love. Those tiny, dark eyes just looking up at me and his tiny, tiny nose! I can hardly stand it. I'm lucky there will be a baby in my immediate family this coming year that I'm sure will be making frequent visits to my house, otherwise I'd go crazy. I can't help but be overwhelmed by those still developing maternal feelings inside me.

I was born to be a mother. And a baker. And maybe a candlestick maker.
Posted by Manda at 10:09 PM No comments:

Having not spent a summer at home since I graduated from high school, I seem to have forgotten the wonderful joys of summer in California. I've gotten used to the hustle and bustle of classes in the summer, going to the freezing and disgusting Rigby lake for refreshment, and not having air conditioning (in my apartment or my car.)

Being home is so different. This week instead of stressing about finals and clean checks and moving home, I went swimming and to a BBQ with my family, and I played at the park with my niece and nephew. I made meals with tons of fresh fruits and vegetables and I stayed out late at the movies with my friends. It's a wonderful feeling. It hasn't been excruciatingly hot and the pool is always in the backyard.

I've been to the beach this summer more than I have been in the past three years. It's glorious. I love the beach. I love California. I love that I live so close to Los Angeles that I can go do fun things on the weekends just because it sounds like fun at the time. I love that there are endless amounts of Dodger games and bonfires to attend. I love that my swimming suits hardly have enough time to dry before I grab them from the edge of my shower and go out to swim again.

It feels lazy. It feels wonderful.

"We wander for distraction, but we travel for fulfillment"

I've been thinking a lot about what I want to do once I finish school in October. Do I go back to Rexburg? Do I stay at home and work and go to Moorpark? Do I move to Utah? Arizona? Chicago? Somewhere other than home? I don't know. There are so many options, I've been avoiding seriously looking into them for awhile.

Recently one possibility has stuck in my mind, though.

Europe. I want to travel Europe. I want to stuff all my travel supplies into a backpack and set off. I want to spend weeks in certain cities only to get on a train and head off to the next country. I want to stay in hostels and buy fruit from the local markets and spend hours in the museums and meet people. I want to go taste the food with these new culinary eyes of mine and bask in the wonderment of European cuisine. I want to be enriched by the history and enamored with the art work. I want to go.

Thus far I haven't anyone to go with (it's hard to find someone to go with me for three months) but I've still got my heart set on going. 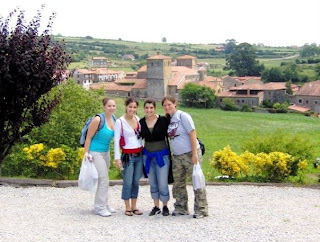 All these changes that have taken place over the past couple months have really been testing me. I've had to really man up and take action and do things that I normally wouldn't be comfortable doing.

My job at the Bread Basket is pretty demanding, especially since I open more than close and that requires me to be there at 6 in the morning. I am not a morning person in the least bit. Getting up at 5 in the morning to go to a highly stressful job where, three months in, I'm still learning how to get everything going isn't my ideal situation. I've been told I do things like a kindergartener and that my writing on the cake looks like crap. Just yesterday a woman called in and yelled at me on the phone, telling me she didn't want fondant or chocolate wrap on her daughters wedding cake, she wanted just frosting! I told her time and again that we don't do that, since it doesn't hold up for that long on display and we've only ever done chocolate wrap or fondant. It went on and on and on and she was really nasty to me. Being a girl who works at BB and simply explaining to her our policy and how we run things doesn't warrant her bad attitude. You don't want chocolate wrap or fondant on the outside? Go to a different bakery and get some nasty cake.

Last night I went out to dinner with the girls from BB for the first time. I was pretty excited because I've felt a little out of place with them. I'm finally making real friends at work and they're pretty chill. Dinner was super fun.

Culinary school is outrageous. I love it and I hate it at the same time. Having been in this program for over three months now (half way!!) I've realized how much I didn't know about cooking. I've learned so much, I don't even know where to begin. About a month ago we had an iron chef type of day where we drew proteins out of a hat and then we had two hours to cook it, add two sides, a sauce, name it, price it, and plate it for chef to taste. I was having anxiety like no other about this day. I even wanted to stay home from the whole day and give up, since it was so intimidating. I was envisioning myself getting shrimp or halibut (both things I know nothing about because I never eat them) but luck was on my side and I ended up with New York strip steak. I pulled it off fairly well, I think, with a cilantro lime rub and oven roasted vegetables.

That challenge is one example of many where this class has pushed my limits. Chef is constantly getting up in my face and making me flustered to the point where I lose my concentration and forget what I'm trying to do. I'm learning as I go and there are many people in the class who're kind of helping me along with the things I don't know about. I've gotten comfortable with not knowing and asking for help. Every time I do, I learn so much.

Whether I'm in class trying my best to follow Chef's fragmented recipes, I'm at work trying to balance ten different things that need to be done at once, or even if I'm keeping a relationship afloat with nearly 4000 miles between us, I'm being pushed. I've stepped up to my limits and shoved back. Every single thing I've learned over these few months has made me become more a woman than a girl. I'm starting to piece together my future and I'm loving every minute.

I am indeed limitless.
Posted by Manda at 5:35 PM No comments:

This week was a hard one.

Last Saturday via facebook I received the news that I girl I know had gone missing. This girl, Kiersten, isn't anyone I know very well. We've only hung out a couple of times together in a group, but we still know who each other are. So you'd think that on Monday when her body was discovered at the bottom of a cliff it wouldn't effect me all that much, but it did. I was at the beach when I found out and suddenly I wasn't enjoying the waves crashing on the sand so much. I felt the gloominess of the grey clouds looming overhead. I was ready to leave.

On my way home I was told that one of my previous boyfriend's father had just passed away from an unexpected heart attack. When I got home, I went into my mother's room and just cried.

As a consequence of these two events, I've found myself thinking a lot about the fragility of life. I've found myself having little bursts of tears at the most random of times. The time we have here is so limited and precious. I have a renewed vigor for life and all the things in it. I've taken the time to appreciate my job and school a little more. I've tried (somewhat unsuccessfully) to be more patient with my brothers. I want to take advantage and do all those things I've dreamed about.

I'm taking the time to live well and enjoy it. You should, too.
Posted by Manda at 10:27 PM No comments: